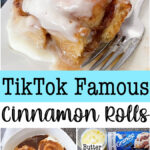 Why I Love This Recipe

I love this recipe because it’s so easy to make and the cinnamon rolls are absolutely delicious! The addition of heavy cream makes these cinnamon rolls extra moist and fluffy, and the butter, cinnamon and brown sugar give them a fantastic flavor. They’re also super quick and easy to make, which is always a bonus.

What are TikTok Cinnamon Rolls?

TikTok cinnamon rolls are the latest viral food trend, and for good reason! These delicious cinnamon rolls are made using store bought cinnamon rolls, heavy cream, butter, cinnamon and brown sugar. The TikTok Cinnamon Roll recipe is easy for anyone to make, no matter what your level of cooking experience!

*Ingredient amounts are located in the recipe card at the end of this post.

Pre-Packaged Cinnamon Roll Dough- I used Pillsbury brand cinnamon rolls, but as I have seen on TikTok, any brand will work just fine, including store brand.

Butter- I used salted butter in this recipe, but you could use unsalted if that is what you have on hand. The amount of butter can also be increased or decreased, depending on your preferences.

Cinnamon- I like to use a lot of cinnamon in my rolls, but you could start with 1/2 teaspoon and add more to taste.

Cream Cheese Frosting- I never feel like the packages of cinnamon rolls have enough frosting, so I always add more. If you’re a frosting lover like me, you can use pre-made frosting like Betty Crocker, or you can make your own using my favorite recipe here.

How to Make these Viral TikTok Cinnamon Rolls with Heavy Cream

[1] Spray a baking dish with nonstick cooking spray and arrange the cinnamon rolls with space between each roll.

[2] Pour 1/2-3/4 Cup of Heavy Cream over the cinnamon rolls, making sure to fill in the gaps between the rolls.

[3] In a small mixing bowl, combine the melted butter, brown sugar and cinnamon. Drizzle the mixture over the cinnamon rolls.

[4] Bake the cinnamon rolls according to the package directions. I baked mine at 350 degrees for about 30 minutes.

[5] Remove the cinnamon rolls from the oven and top with the included icing, and extra cream cheese frosting if desired. Serve warm.

What to eat with Cinnamon Rolls

These rolls are very similar in taste and texture to Cinnabon cinnamon rolls. The addition of heavy cream makes them richer and more moist, and the butter, cinnamon and brown sugar give them a fantastic flavor.

Can I make these ahead of time?

I wouldn’t recommend making these ahead of time as they are best when served fresh. However, you could make the dough ahead of time and store it in the refrigerator until you’re ready to bake them.

Can I freeze these cinnamon rolls?

Yes, these cinnamon rolls can be frozen. I would recommend freezing them without the frosting and then thawing them and adding the frosting when you’re ready to eat them.

I baked mine at 350 degrees for about 30 minutes. Every oven is different, so be sure to check the rolls at the 20 minute mark and bake until they’re golden brown and cooked through.

What does heavy cream do for cinnamon rolls?

Heavy cream makes the rolls more moist and rich. You could substitute whole milk for the heavy cream, but I prefer the rolls made with heavy cream.

How do you make store bought cinnamon rolls taste homemade?

There are a few things you can do to make store bought cinnamon rolls taste homemade. First, add more frosting! I also like to add a layer of heavy cream, butter, cinnamon and brown sugar before baking. This gives the rolls an extra boost of flavor.

Finally, don’t be afraid to experiment with different flavors. Try adding some almond extract, orange zest or even a little bit of rum to the frosting. The possibilities are endless!

How to bake Pillsbury cinnamon rolls?

Follow the directions on the package. For the variety I bought, you add the cinnamon rolls to a baking dish and bake at 350 degrees for 23-27 minutes.

Can this recipe be doubled?

Yes, this recipe can easily be doubled. Just use a 9×13 inch baking dish and double all of the ingredients.

How to Store TikTok Cinnamon Rolls

These cinnamon rolls are best served fresh, but they can be stored in an airtight container at room temperature for up to 3 days. If you want to reheat them, just pop them in the microwave for a few seconds.

Like I mentioned above, you can use pre-made frosting, but my favorite recipe includes cream cheese, butter, powdered sugar and vanilla extract. You can get the full recipe here.

I hope you enjoy this recipe for TikTok cinnamon rolls! If you try them, please let me know what you think in the comments below. And be sure to tag me on Instagram @theflourhandprint so I can see your beautiful creations!

Pin this recipe for later!

I made them using the orange cinnamon rolls and added some orange peel to the butter cinnamon mixture. I cooked them as the packaging suggested 17 minutes. They were so amazing. Next time I will make some extra orange cream cheese icing to add on top.

I made these this morning using the pumpkin grands and added some pecans and they were out of this world great. Thank you

Just finished making and trying these! OMG I will never have cinnamon rolls any other way! Outrageously delicious! Thanks for the tip!

Is all the liquid supposed to be absorbed?

Most of it will be absorbed, but there was still some liquid in the bottom of the dish when I made it.

Would it work if I used the regular Pillsbury cinnamon rolls instead of the grands?

I haven't tried, but I don't see why not.