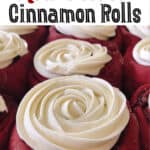 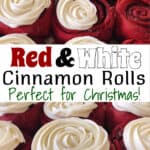 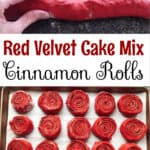 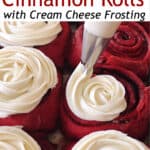 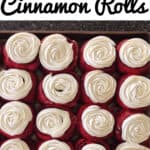 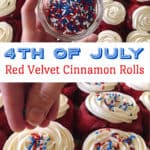 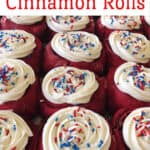 This recipe will show you how to make delicious red velvet cinnamon rolls using a cake mix short cut, plus the most creamy, delicious cream cheese frosting! These cinnamon rolls are great for holidays like Christmas, Valentine’s Day, and the 4th of July!

Why You’ll Love this Recipe

Cinnamon rolls are something that I make almost weekly for my family. My kids love them!

So, using a cake mix as a short cut to make cinnamon rolls is a win in my book.

The beauty about using a cake mix is that you can vary the flavor combinations like these Butter Pecan Cinnamon Rolls with Salted Caramel Glaze.

A couple of weeks ago, I needed to make a breakfast item for my neighborhood 4th of July party. I wanted to take something festive and colorful.

I decided to use one of my favorite flavor combinations, red velvet cake and cream cheese frosting and make cinnamon rolls!

I topped the cinnamon rolls with red, white, and blue sprinkles to celebrate the holiday.

Because of the red and white color of these cinnamon rolls, they would make a great breakfast for Christmas morning!

Can You Make Cinnamon Rolls Ahead of Time?

The answer is yes! You can definitely make these red velvet cinnamon rolls ahead of time. I make them a day ahead all the time.

To do this, follow all of the directions to make the cinnamon rolls and then store them for a day in an airtight container before serving.

How to Freeze Cinnamon Rolls

Freezing these Red Velvet Cake Mix Cinnamon Rolls is a great way to make a batch of these go a long way. Here’s how I do it:

Get a Bosch Mixer Here

How to Make Cream Cheese Frosting

To add the frosting to the cinnamon rolls, there are a few things you can do.

First, you can spread the frosting over the warm cinnamon rolls and let it melt a little bit, kind of like a glaze.

Second, you could wait until the rolls have cooled and them use a spatula to spread the frosting over the top.

The third option is what I choose to do for our picnic because it looks so good!

I used a large star tip and a piping bag to pipe the cream cheese frosting on top of the cake mix cinnamon rolls!

It is really easy to do and makes your cinnamon rolls look professional! Here are some step by step instructions:

As an Amazon Associate and member of other affiliate programs, I earn from qualifying purchases.

How would you make these into Blue Velvet cinnamon rolls I’m looking for a recipe can you help me?