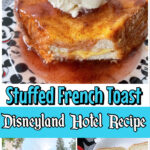 A crispy french toast recipe that is perfect anytime or on special occasions! This recipe is easy to follow and yields delicious results every time. The key to getting crispy french toast is to use thick slices of bread and to coat them generously with the batter. I like to use a vanilla batter and use lemon custard as a filling between two slices. Once the bread is coated, it can be cooked in an air fryer, deep fried, or grilled on the stove top like regular French toast. I prefer to air fry my french toast, but all methods will yield crispy results. Once the french toast is crispy and golden brown, it is dusted with cinnamon sugar and served with homemade guava syrup and whipped cream. Just like Tarangoa Toast at the Disneyland Hotel!

Why I Love This Crispy French Toast

My son and I had the opportunity recently to stay at the Disneyland Hotel. While searching the Disneyland app for breakfast, we found the Tangaroa Terrace Tropical Bar & Grill right at the hotel!

After searching the menu, I found the Tangaroa Toast and knew that is what I wanted to order. Here is how it is described on the menu:

After eating this for two days in a row, I decided that it may have been the best French toast ever and that I needed to make this deliciousness at home, and share the recipe with you!

*Ingredient amounts are located in the recipe card at the end of this post.

[1] Lemon Custard: In a mixing bowl or food processor, beat together the milk, heavy cream, instant vanilla pudding and lemon zest for about 1 minute, until completely combined. Place in a container and refrigerate until ready to use.

[2] Guava Syrup: Mix 1/2 cup of guava nectar with 2 tablespoons of corn starch. Heat the remaining 1 1/2 cups of guava nectar over medium heat until boiling, then reduce the heat to a simmer. Slowly whisk in the corn starch mixture and stir until the syrup has thickened. Keep warm over medium-low heat.

[3] French Toast Batter: In a blender or food processor, combine the eggs, vanilla extract and sugar. Pour the mixture in a shallow dish.

[4] Combine 3/4 cup of sugar and 2 teaspoons of cinnamon to create the cinnamon sugar coating.

[5] Spread 1-2 tablespoons of lemon custard on a slice of bread and close like a sandwich.

Why doesn’t my French toast get crispy?

If you soak the bread for too long in the French Toast batter, it may not come out crispy. Other reasons include not cooking it at a high enough temperature or not using thick enough slices of bread

Is French toast supposed to be crispy?

It depends on your preference. Many people enjoy French Toast that is on the softer side, while others like crispy French toast!

How can I prevent my French Toast from being soggy?

Soggy bread can be caused by a few different things. If you soak the bread for too long in the batter, it will become soggy. Another reason can be not cooking it at a high enough temperature. Be sure to cook the French toast on a preheated griddle or frying pan over medium-high heat

How to keep French toast warm?

You can keep French toast warm by keeping it in a low temperature oven, such as 200 degrees Fahrenheit. Place the cooked French toast in a single layer on a wire rack set over a baking sheet and place in the oven to keep warm. Do not stack the slices of French toast on top of each other or they will become soggy.

Items Used in this Recipe